The Toto Vespin II is one of Toto’s flagship products. This two-piece toilet shares some similar characteristics with other toilets made by the same manufacturer.

It has an elongated bowl design and a Universal height which makes it ADA compliant. It’s design and mechanics follow Toto’s reputation for producing low water-consuming toilets.

The Toto Vespin II is an advanced toilet model with a design capable of administrating water as efficiently as possible.

This feature has become a defining characteristic of the TOTO brand, and their advanced flushing system is now being implemented in most of their newer toilets.

Just like the Carlyle II model, the Vespin II uses the Tornado Flushing system, which is a double cyclone system that distributes water around the toilet.

Save Money on Water with TOTO’s Smart Flush

It serves as a mean to remove as much residue as possible without wasting too much water. The Vespin II uses just a tad more than 1 gallon of water per flush, equaling the quality of the best Toto products.

The product has the WaterSense label, which means you’ll be saving a lot of money on water in the long run. The Vespin II is a two-piece toilet – it’ll be easier for you to replace either the bowl or the tank, should one of these break down sooner than expected.

Let’s take a general look at some of its features before moving on to the specifics.

Specifications of the Toto Vespin II 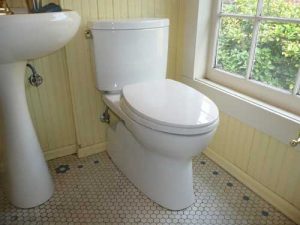 Toto is one of the world’s most well-known toilet manufacturers.

The quality of their toilets rarely lets a customer down, and the Toto Vespin II is one of those products that live up to that statement.

The number of features you’ll find in this ceramic two-piece toilet certainly make it worth its rather hefty price.

Keep in mind that this is a high-efficiency toilet. As most products created by the company, the inner system used in the manufacturing process is patented by Toto themselves.

The build aims to save water as well as the time it takes to fully clean the bowl. If you want to know everything about Toto Vespin’s features, keep reading further.

As we’ve said above, the Toto Vespin II is a two-piece toilet. This means that the tank and the bowl are built separately, hence making them separately replaceable.

The installation process of a Vespin II is way more straightforward than other Toto products (like the Carlyle II, for example). Two-piece toilets are easier to mount. Regardless, the design of both the tank and the bowl are well planned.

They can keep residue away and stop it from sticking thanks to the SanaGloss finish that the company applies to the ceramic. This finish reduces the number of times you’ll find yourself needing to clean the bowl, and it’s one of the products more important features.

The toilet is designed to fit most types of bathrooms, but if you’re looking for a slim toilet, we recommend checking the Toto Carlyle II instead. 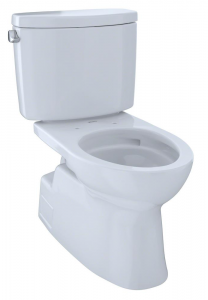 The bowl shape and its height make this product easily comply with the ADA act. It offers comfortable seating for people with disabilities without giving up on offering general relief.

The bowl is manufactured in the USA, and its surface is as smooth as you could wish. Everything is at the same level and it has no indentations or differently-crafted parts.

The entire inside of the bowl is layered with SanaGloss, meaning that nothing should stick to it unless it’s subjected to extreme circumstances.

Regardless, it’s able to deal with any waste very easily. Water always stays inside the bowl thanks to the rim design and the way it distributes the liquid around the toilet.

The elongated and skirted shape might cause some issues when it comes to the placement of the bowl and your water lines (they need a separation of at least 7 feet). It’s nothing that a plumber can’t help you solve, though.

The seat height of the toilet is Universal. Just like in other Toto models, it can be used by people of all heights and ages with no issues.

Children might struggle a bit, but they’ll be able to use the product. The height greatly benefits tall people, though. Knees remain at a comfortable level and legs are unlikely to cramp.

The seat is not included with your purchase. Toto offers sits that fit their toilets; some seats are very pricey, but you can get a custom Toto seat for aorund $39. We do recommend not buying the cheapest option, as it likely won’t be too comfortable. The Toto Vespin II comes with the powerful Tornado Flushing technology that was perfected by Toto.

The powerful system can fully clean the toilet bowl without having to use much water.

This is mainly thanks to the distribution system used to move the water around the bowl’s elongated shape. A single flush is more than enough to clean the whole bowl.

We Would Have Loved to See Another Flushing Option

It’s a shame that this toilet only comes with one flushing option, though – it would be good to flush less water if there’s only liquid residue on the bowl.

Regardless, the company also offers a version of the Vespin II which saves additional water, as it barely uses 1 gallon per flush.

The Tornado Flushing technology has one additional advantage: the toilet makes almost no noise while using it. It works quickly, quietly and efficiently.

How Does the Tornado Flushing System Work?

The Tornado Flushing earns its name thanks to the way water is distributed inside the bowl. Two nuzzles send water at full pressure in different directions, creating a tornado effect that eliminates every trace of residue from the bowl.

The goal of this system (which it comfortably achieves) is to reduce the amount of water that it takes to flush a regular toilet, while also providing a more powerful flushing effect.

Regular toilets include small holes positioned at the edges of the seat’s rim, but the Tornado Flushing substitutes these with the nuzzles we mentioned above.

The water pressure combines with gravity to fully cleanse the bowl, removing any inconvenient residue that would be otherwise left behind. 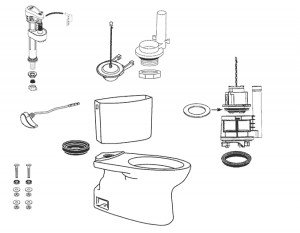 The installation process of the Toto Vespin II is way more straightforward than the procedure you’ll need to undergo with a 1-piece toilet.

We do recommend you have enough available space to keep the bowl separated from your water pipes by at least 7 feet. Otherwise, the installation process might prove to be difficult.

The Vespin II can be installed on your own if you have the right basic tools (screwdrivers, spanners and needle-nose pliers).

As in any two-piece toilet, the Vespin’s tank and bowl are installed individually. Carry them isn’t too difficult and you won’t need help from a third party to place them properly – just be sure to follow the manual.

The original price of this toilet is close to the thousand-dollar mark, but you’ll be able to buy it for less if you know where to look. Ideally, you’ll need to pay between $450 and $600 to purchase the Vespin II.

There’s also a different model which you can get for around $100 more. The additional cost of this Vespin II model (called 1G) will probably be worth it in the long run, as its Tornado Flushing system uses only 1 gallon of water per flush. 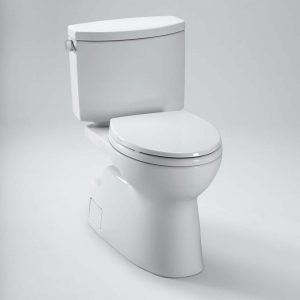 Just like most Toto products, the Toto Vespin II comes with a 1-year limited warranty.

This warranty is nothing but a formality, though – the Vespin II is very well built.

You won’t need to worry about resorting to the warranty because of any factory defects.

If you choose to buy the Toto Vespin II, you’ll be getting a high-quality and efficient toilet that will surely fulfill the needs of your household members. Even so, the product does have a few drawbacks that mustn’t be ignored if you’re going to purchase it.

Other TOTO Toilets to Consider

The Toto Vespin II is a high-quality toilet that will help you save a lot of water in the long run. It’s one of the most efficient toilets on the market, and one of the most powerful you can get for its price.

The fee you’ll have to pay to get it is justified by the sheer amount of benefits that it brings – if you can afford to buy it, you might want to seriously consider getting it.

TOTO Neorest 750H Review – Is It The Best from The TOTO Line?

Kohler Devonshire Toilet Review – Is It Really That Good?

TOTO Eco Soiree Review – Is It More Than Just A Sleek Design?